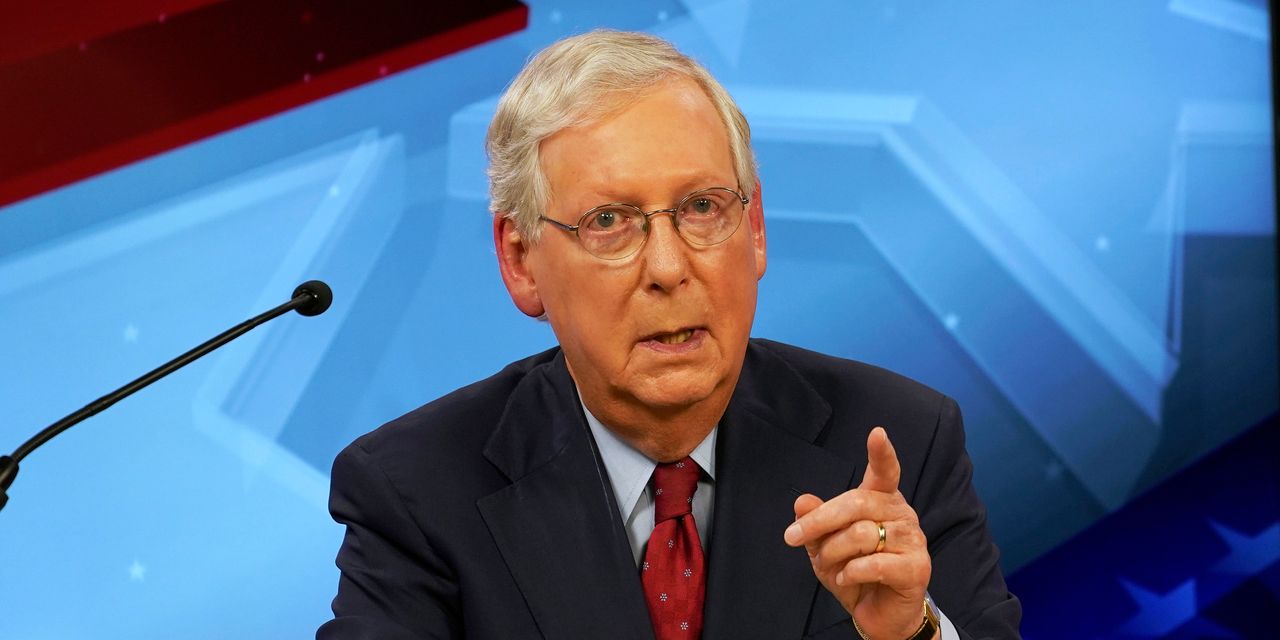 Senate Majority Leader Mitch McConnell ranks as a favorite among the CEOs of S&P 500 companies, as the bosses have combined to give more money to the powerful Republican lawmaker’s campaign than to any other candidate engaged in a competitive 2020 Senate race.

The Kentucky politician’s re-election effort has received a total of $258,880 from 37 chief executives whose companies are components of the S&P 500 stock index
SPX,
.
Only one other candidate in a competitive Senate race has received more than $200,000 from S&P CEOs during the 2020 cycle — Republican Sen. David Perdue of Georgia.

The table below shows all of the giving by S&P bosses in the 15 contests not rated as solidly Republican or solidly Democratic by the nonpartisan Cook Political Report, with the races instead scoring ratings that range from “Toss up” to “Lean D” or “Likely R.” The table’s figures come from a MarketWatch analysis of the most recent Federal Election Commission data on individual contributions. Anyone who held the CEO job in 2019 or 2020 at a company that was part of the S&P 500 is included.

Source: MarketWatch analysis of Federal Election Commission processed reports and initial filings from committees linked to each candidate by the FEC and covering individual donations made between Jan. 1, 2019, and Sept. 30, 2020.

Individuals and organizations want to build relations with powerful legislators, and they can do that through campaign contributions, said Michael Beckel, research director at Issue One, a nonpartisan watchdog group that aims to reduce the influence of big money in politics.

“One of the most important members of Congress that anybody could be cultivating a relationship with is Senate Majority Leader Mitch McConnell,” Beckel told MarketWatch in an email.

“McConnell has been setting much of the Senate’s agenda this Congress, and, assuming he wins re-election next month, which polls show he’s likely to do, [he] will remain one of the most influential senators in Washington — either as Senate majority leader or the leader of the Republican caucus.”

McConnell’s race is rated as “Likely R” by Cook, and a FiveThirtyEight forecast gives him a 96% chance of defeating his Democratic challenger, Amy McGrath. But FiveThirtyEight also gives Democrats a 77% chance of taking over control of the Senate from Republicans.

Related: Here are the Senate races to watch, as Democrats battle to take control from Republicans

And see: If the Democrats win the Senate, Big Tech better be ready for a bigger fight

McConnell’s campaign didn’t respond to a request for comment on the donations from S&P CEOs. McGrath’s team attacked the Republican incumbent as “the epitome of the D.C. swamp” when asked about the contributions. She has received a total of $14,500 from five S&P bosses.

“For 36 years, Mitch McConnell has done nothing but put corporate special interests ahead of working people in Kentucky,” said a spokesman for McGrath’s campaign, Terry Sebastian, in a statement. “It is no surprise that corporate CEOs are now returning the favor by giving him money for his re-election.”

The table below shows the current or former S&P chief executives who have contributed the most to McConnell’s main campaign committee and an affiliate committee. Out of his 37 total CEO donors, it lists the 14 execs who have given more than $5,600 in the 2020 cycle.

*No longer CEO after Celgene merged with Bristol Myers Squibb

Source: MarketWatch analysis of Federal Election Commission processed reports and initial filings from committees linked to each candidate by the FEC and covering individual donations made between Jan. 1, 2019, and Sept. 30, 2020.

When asked about Chevron
CVX,

CEO Michael Wirth’s contributions to McConnell’s campaign, a spokesman for the oil company said employees “at all levels of the company are free to participate in the political process, including through donations to candidates of both major U.S. parties.”

Most of the companies listed in the table above didn’t respond to requests for comment. A representative for Bristol-Myers Squibb
BMY,
,
Celgene’s owner as of November 2019, said Mark Alles is “Celgene’s former CEO and is not employed at Bristol-Myers Squibb.” The donations by Alles to McConnell came in 2019’s third quarter, when he was still Celgene’s CEO.

McConnell is a polarizing figure who was praised this month by his fellow Republicans for helping President Donald Trump put Amy Coney Barrett on the Supreme Court, while Democrats blasted him for the move.

The Kentucky Republican also has gotten attention for not supporting another major coronavirus aid package but instead backing the Senate GOP’s smaller relief bill. Last year, the veteran lawmaker said he agreed with how House Speaker Nancy Pelosi, the California Democrat, was describing him as the “Grim Reaper” for killing Democratic legislation in Congress.

The most that an individual can give to a candidate’s main campaign committee is $2,800, though it can total $5,600 if someone contributes for both the primary and general elections, and a candidate’s affiliate committees don’t face those limits.

Also see: Not one S&P 500 CEO is donating to Bernie Sanders or Elizabeth Warren

Instacart Is Cutting In-Store Shopper Jobs. What’s That Mean for Your Gig?

Compared to Europe and China, America Is Still a Safe Bet | Daniel Lacalle

Instacart Is Cutting In-Store Shopper Jobs. What’s That Mean for Your...

Instacart Is Cutting In-Store Shopper Jobs. What’s That Mean for Your...