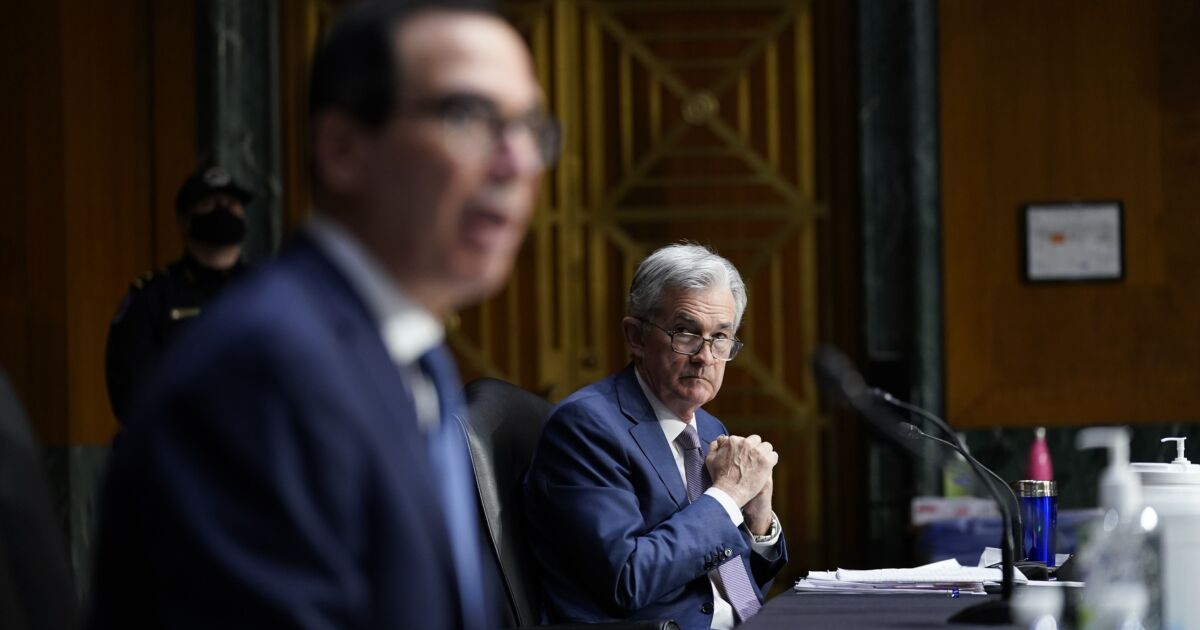 WASHINGTON — Senators sparred on Tuesday over the termination of several of the Federal Reserve’s emergency lending facilities as Congress continues to debate additional coronavirus stimulus legislation.

At a Senate Banking Committee hearing, Treasury Secretary Steven Mnuchin defended the termination of emergency lending facilities authorized by the Coronavirus, Aid, Relief, and Economic Security Act, as well as the return of excess funds to the Treasury Department. Federal Reserve Chairman Jerome Powell, who appeared before the committee, urged Congress to enact additional fiscal relief as the coronavirus pandemic continues to hit businesses and families.

Mnuchin’s testimony was met with support from Republican senators, who said he was simply following the law. Democrats, on the other hand, criticized Treasury for inhibiting the ability of the incoming Democratic administration to stabilize the economy as the pandemic continues.

“I agree with Secretary Mnuchin on the success of the 13(3) facilities and the termination language in the CARES Act,” said Senate Banking Committee Chairman Mike Crapo, R-Idaho. “The 13(3) facilities funded under the CARES Act were effective, and fulfilled their purpose to stabilize markets, facilitate credit flow and provide liquidity.”

But Sen. Sherrod Brown, the top Democrat on the panel, criticized Treasury’s request as a political ploy to hamper the incoming administration’s ability to tackle the economic hardships when it assumes office next year. President-elect Joe Biden has already announced his intent to nominate former Fed Chair Janet Yellen to succeed Mnuchin at Treasury.

“After the election, you canceled the Federal Reserve lending programs, taking away critical tools to invest in the people and communities and small businesses that make this country work,” Brown said. “There is no legitimate justification for it. Either you’re purposefully trying to stop President-elect Biden and Janet Yellen from getting to work for the people we all serve, or you’re so delusional that you think because the stock market is back up, everything is fine.”

Mnuchin said that the funds allocated in the CARES Act for the Fed’s facilities were intended to be used temporarily.

“My decision not to extend these facilities was not an economic decision,” Mnuchin said. “I’m surprised to hear Sen. Brown use words like ‘sabotage, no legitimate justification, delusional, malpractice.’ … This is perfectly clear. The Senate provided unprecedented authority to the secretary of the Treasury in giving me $500 billion. The statute was very clear. I find it implausible that any member of this committee believes that in voting for the CARES Act you were authorizing me to invest $500 billion to make loans in perpetuity.”

Powell, on the other hand, said that the Fed would have maintained the emergency lending programs if the Treasury Department did not request their termination.

“Our thinking is that we would have left the facilities in place to be backstops,” Powell said. “We don’t question the secretary’s decision about the CARES Act money, because that’s entirely his decision to make, but I think central banks generally would’ve done that.”

“I don’t believe that we should be asking Secretary Mnuchin to do Congress’s job,” said Sen. Thom Tillis, R-N.C. “If Congress is serious about paycheck protection, if they are serious about stabilizing the economy, then get serious about passing a follow-up to the CARES Act.”

The hearing came as a bipartisan group of senators introduced stimulus legislation, which includes roughly $300 billion in funding for the Small Business Administration’s Paycheck Protection Program, $180 billion for the extension of pandemic unemployment benefits, and set-asides for community development financial institutions and minority depository institutions.

Sen. Mark Warner, D-Va., urged senators to review the proposal, which has not yet been endorsed by House Speaker Nancy Pelosi, R-Calif., or Senate Majority Leader Mitch McConnell, R-Ky.

“It’s not a long-term plan that I know that Secretary Mnuchin is negotiating with Speaker Pelosi. It’s not maybe what President-elect Biden will want to do,” Warner said. “But this package, which weighs in a $908 billion, does take care of [unemployment insurance], it takes care of health, it takes care of student loan assistance, it takes care of small business, with a focus on those CFDIs.”