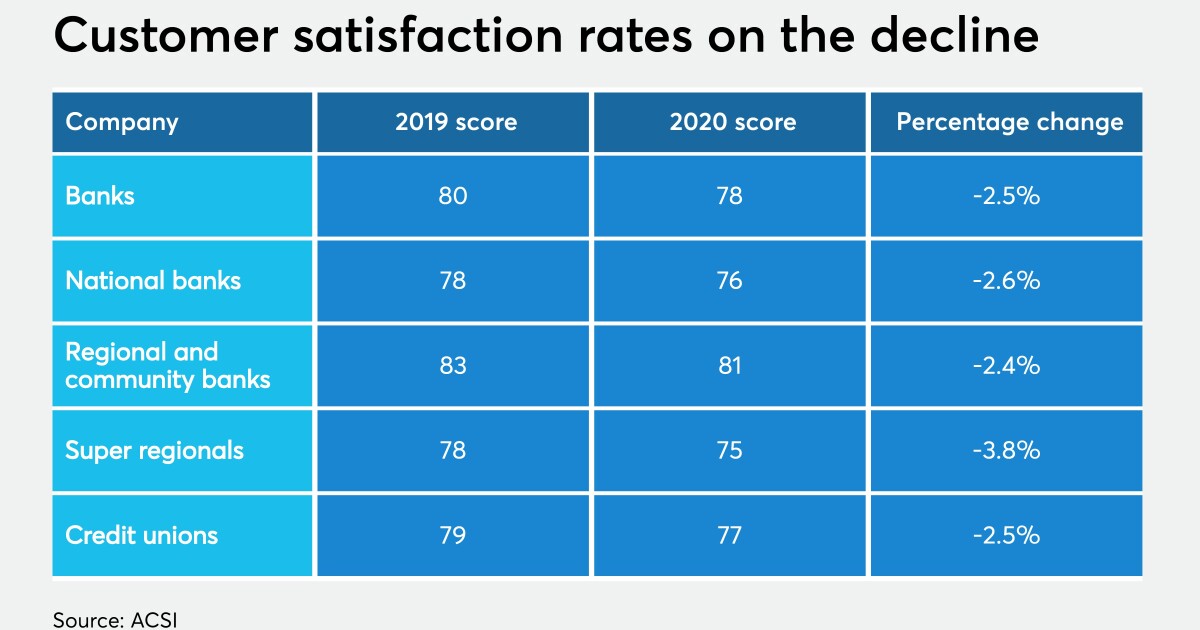 Though they are doing better than credit unions, banks’ scores in 2020 were also down from a year earlier.

But the credit union industry’s score has fallen even more since the onset of the coronavirus pandemic, ACSI found. That did not happen to banks.

“For the six-month interview period from April to September 2020, satisfaction with credit unions is significantly lower (75) compared to the previous six months (77),” the report said. “Perhaps more so than bank customers, credit union members may be missing the personal touch that their institutions could more easily achieve prior to the constraints of the pandemic.”

The banks with the biggest declines from a percentage perspective were Citigroup, PNC Financial Services Group and Truist Financial, whose scores each fell by 5%, and Fifth Third Bancorp, which had a 6% decline.

ACSI’s data showed customer experience weakening at all three bank categories in the last year, though super regionals were hit hardest, with national and community banks exceeding their scores in every category except ATM and branch access.

The overall customer experience is worse in 2020 than it was last year, according to ACSI’s data, with declines reported in every category, including 2% drops in staff courtesy and transaction speed. The survey also reported a second straight year for declines in the quality and reliability of banks’ mobile apps.

Scores for call centers continued to decline, with super regionals seeing a 6% largest drop. Large banks’ scores fell by 1%, while small banks had a 2% decline.