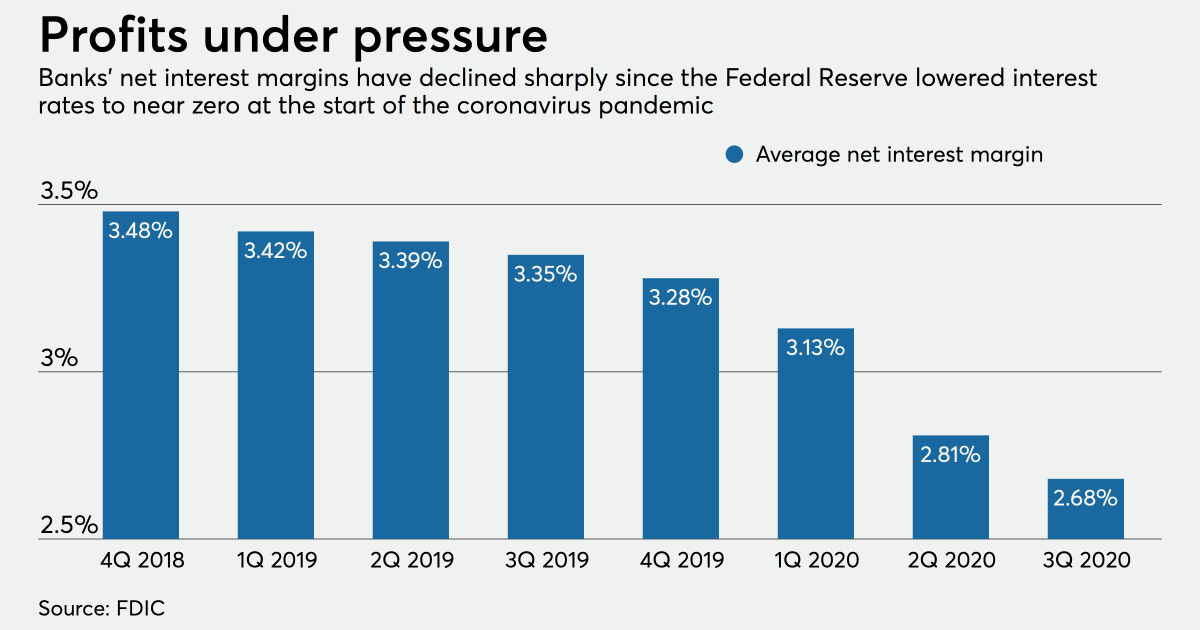 WASHINGTON — Even though earnings recovered last quarter as banks eased up on loss provisions, a sharp decline in asset yields could bode trouble ahead amid continuing economic uncertainty.

That was a key takeaway from the Federal Deposit Insurance Corp.’s report on the banking sector’s health in the third quarter. While net income rose 173% from the prior quarter thanks mostly to a nearly 77% decline in loss provisions, a persistent drag on interest rates led to the lowest average net interest margin on record.

“The low interest rate environment, flat yield curve and continued economic uncertainties related to the trajectory of the COVID-19 pandemic will likely continue to exert downward pressure on revenue and challenge the banking industry over the near to medium term,” FDIC Chair Jelena McWilliams said at the release of the Quarterly Banking Profile. “Nonetheless, the banking industry remains well capitalized with ample liquidity and has, to date, weathered the economic effects of the pandemic.”

The nation’s banks benefited from calmer economic seas in the third quarter of 2020. Banks posted near-normal quarterly net income of $51.2 billion in the three months ending Sept. 30. That was a notable jump from the second quarter, when surging loan-loss provisions at the outset of the pandemic led to a sharp profit drain.

However, third-quarter profits remained depressed compared with a year earlier, declining by 10.7%, or $6.2 billion, from the third quarter of 2019.

About half of all banks reported lower net interest income from a year earlier. Low interest rates could remain a challenge to banks’ profitability as the Federal Reserve has shown no sign of budging from low-rate policies while confronting continued economic uncertainty from the pandemic.

FDIC officials said downward pressure on interest margins could persist for some time.

“In this very low and flat interest rate environment, assets have been repricing more quickly than liabilities,” Diane Ellis, director of insurance and research at the FDIC, said on a call with reporters.

“That’s one of the strong headwinds on earnings at this point,” Ellis added.

The rate of noncurrent loans also ticked up nine basis points to 1.17% in the third quarter. The balance of loans 90 or more days overdue increased by about $9.3 billion in the same period, or nearly 8%, for a total of $127.5 billion. According to the FDIC, that increase was driven by a 22% surge in noncurrent loan balances among one- to four-family residential mortgages.

However, Ellis said the rising noncurrent rate was partly affected by banks having to take back $4.2 billion of loans that were previously in Ginnie Mae securities. Mortgage servicers are required by Ginnie Mae to buy delinquent loans out of securitized pools.

“It’s not a source of great alarm right now, but obviously, given the great deal of economic uncertainty and stress, it’s something we’re going to keep our eye on,” Ellis said.

Still, industry profits benefited from a slowdown in loss provisions, which decreased $47.5 billion compared with the second quarter to a total of $14.4 billion. But provision expenses remained 3.5% higher compared with the same period last year. Nearly 53% of all banks reported increasing their provisions year-over-year.

“Lower provisions reflect the improving economy and a general expectation from the banking industry of stabilization in the expected future credit performance of the loan portfolio,” McWilliams said.

One bright spot for the sector could be found among community banks, which reported a 10% increase in net income from a year earlier to $659 million. Earnings rose for smaller banks even though they continued to set aside more loss provisions, which rose 116% in the third quarter, and experienced rapidly shrinking net interest margins.

Deposit growth has also eased somewhat compared to the massive influx of deposits banks received at the outset of the COVID-19 pandemic. Deposits increased by just $156 billion in the third quarter, compared with $1.18 trillion in the previous quarter.