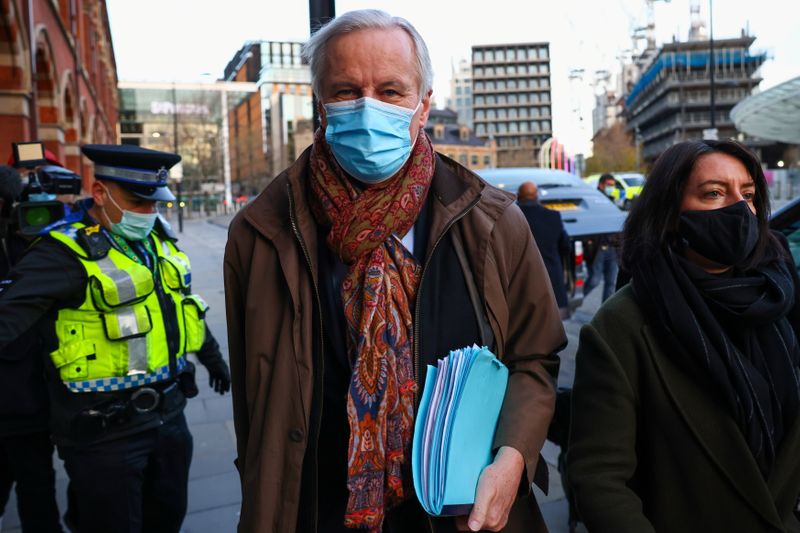 By Estelle Shirbon and Conor Humphries

LONDON/DUBLIN (Reuters) – British and European Union negotiators will meet in Brussels on Sunday in a last-ditch attempt to strike a post-Brexit trade deal before a transition agreement ends on Dec. 31.

British Prime Minister Boris Johnson and European Commission President Ursula von der Leyen spoke on Saturday and instructed their teams to resume talks after they were paused on Friday.

In a joint statement after their call, Johnson and von der Leyen said that no agreement was feasible if disagreements on the three thorny issues of governance, fisheries and competition rules, known as the level playing field, were not resolved.

“This is the final throw of the dice,” a British source close to the negotiations said.

EU Brexit negotiator Michel Barnier said the talks on Sunday with his British counterpart David Frost would show whether a new trade deal could be struck.

A majority of Johnson’s ministers were willing to back him if he decides a deal is not in Britain’s interests, the Times newspaper reported, saying 13 cabinet ministers – including eight who opposed Brexit – had confirmed they would do so.

British farming minister George Eustice backed that up in an interview on Sky News on Sunday, saying the country had done a huge amount of preparation for a no-deal and was ready to go through with such a scenario.

“We’ll continue to work on these negotiations until there’s no point in doing so any further,” said Eustice.

But Irish Foreign Minister Simon Coveney, a key figure in Brexit talks in recent years, said it was not credible for the British government to suggest they could manage a no-deal.

Striking a more optimistic note, Coveney said it was his “very strong view” that a deal could be done. “We are more likely to get a deal than not,” Coveney told Ireland’s Sunday Independent newspaper.

Negotiations were paused on Friday after hopes of a deal earlier in the week evaporated. The British team said the EU had made demands incompatible with its sovereignty and warned that the talks could end without an agreement.

Coveney denied the EU had hardened its stance.

If they fail to reach a deal, a five-year Brexit divorce will end messily just as Britain and its former EU partners grapple with the economic cost of the COVID-19 pandemic.

Experts have warned that a no-deal scenario would cause huge long-term disruption to the British economy.