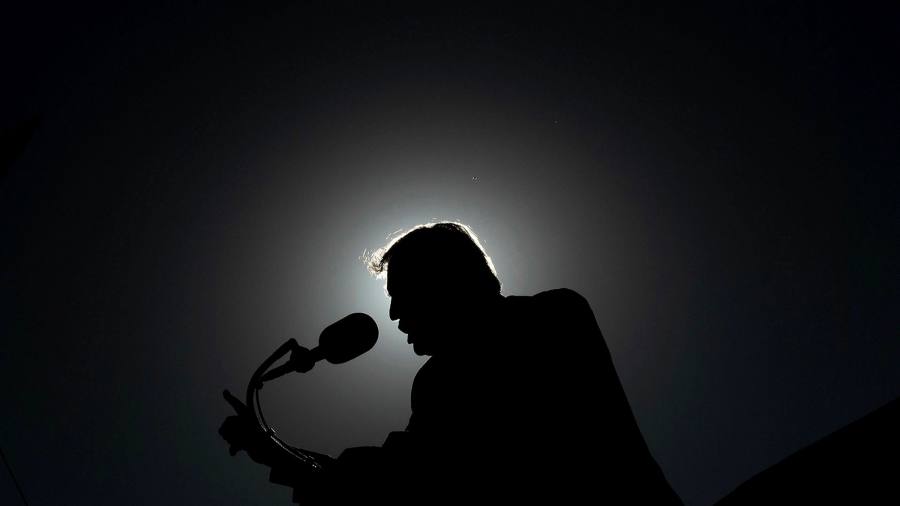 FT subscribers can click here to receive FirstFT every day by email.

Donald Trump’s chance of victory in next week’s presidential election appeared to narrow as polls showed him losing ground in several swing states where coronavirus cases are surging.

Mr Trump will continue his tour of battleground states on Thursday, visiting Florida and North Carolina before returning to Wisconsin and Minnesota on Friday. But his prospects in Midwest states that propelled him to victory in 2016 have taken a blow as a third surge of Covid-19 focuses attention on his pandemic management.

A Financial Times analysis shows Joe Biden has an average polling lead of 4.3 points in swing states where cases have risen more than 7 per cent in the past week, compared with a 1.4 point lead where the rise in cases is 6 per cent or less.

US media companies, which play an unusually large role in elections compared with other democracies, are preparing for possible delays to the result. The Supreme Court allowed late mail-in ballots to be counted in North Carolina and Pennsylvania.

The author of an anonymous September 2018 column alleging a secret “resistance” inside the Trump administration has identified himself. (FT, NBC, NYT, AP)

Australia’s compliance culture has been crucial to its success in suppressing the virus, Jamie Smyth writes. Follow our live coverage here.

Exclusive: US loosens Huawei curbs The US is allowing chip companies to supply Huawei with non-5G components, people briefed by Washington said. US authorities also charged eight people with allegedly conducting an illegal Chinese operation on American soil to intimidate and kidnap those Beijing viewed as dissidents. (FT)

Exclusive: Tiffany-LVMH deal Tiffany’s board has approved a sale to LVMH at the slightly reduced price that values the US jeweller’s equity at about $15.8bn, ending a bitter legal conflict that threatened to derail the luxury sector’s biggest-ever acquisition. (FT)

Most Britons unclear on Brexit Two-thirds of Britons are confused about how the UK’s relationship with the EU will change, including travel within Europe, according to YouGov polling. The UK will face a legal challenge over its refusal to launch an independent inquiry into possible Russian election interference. (FT)

WTO leadership fight The US has rejected Ngozi Okonjo-Iweala, Nigeria’s frontrunner to head the World Trade Organization, defying the body’s other 160 members and leaving the outcome uncertain. The process requires a consensus rather than a formal vote. (FT)

UK migrant outcry The UK faced calls to reopen refugee resettlement schemes as authorities in northern France continued the search for further migrants who drowned when a boat carrying up to 20 Iranians capsized on Tuesday, leaving two adults and two children dead. (FT)

Earnings round-up Standard Chartered will consider resuming dividends after reporting a better than expected underlying pre-tax profit. Ford beat expectations after focusing on pick-ups and SUVs over sedans, while Samsung warned of weaker earnings ahead on lower chip prices and competition from Apple’s 5G iPhone. (FT)

US GDP Donald Trump will look to capitalise on gross domestic product figures out on Thursday that are expected to show a quarter-on-quarter rebound of 7 per cent. Analysts will also be watching initial jobless claims. (FT)

The next pandemic Hunting for new viruses has become more difficult during the pandemic, but it has never been more important. Like most other novel human viruses, Sars-Cov-2 is zoonotic: it crossed from animals into humans. As deforestation and climate change increase disease spread, virus-hunters race to identify — and prevent — the next pandemic. (FT)

Working with long Covid-19 Most Covid-19 patients recover within two weeks. But some with so-called “Long Covid” experience symptoms for months, presenting a challenge for both employers and staff. Emma Jacobs speaks to some of them. (FT)

Marcus Rashford’s lesson in politics The England footballer’s campaign harnesses a powerful demand for fairness, Philip Stephens writes — even for many of Boris Johnson’s own MPs, it seems blindingly obvious that, whatever the costs, poor children should not be going hungry. (FT)

Can Democrats deliver Bidenomics? Joe Biden would embark on a programme of high spending and tax rises to shore up America’s economic recovery. But implementing it will not be simple. Jemima Kelly writes that the media needs to be more honest in how it reports on Mr Biden. (FT)

To contain Covid-19, co-operate Masks, outdoor dining, school closures — we must pay attention to which local rules work best if we are all to beat the pandemic, Gillian Tett writes. One exemplar: Taiwan, which has gone 200 days without a locally transmitted case. (FT, Bloomberg)

Sacha Baron Cohen is serious Over the past two decades, British satirist, writer, producer and actor Sacha Baron Cohen has made an unforgettable impact. The popular provocateur discusses bringing back Borat in the Trump era, and its more pressing political purpose. (FT)

Podcast of the day

Who’s afraid of Ai Weiwei? After a summer of protest, Culture Call hosted one of the most influential artists and activists of our time to discuss how to protest creatively and powerfully (“you only see your power from your enemy’s eye”) and the symbolic meaning of the pandemic. (FT)