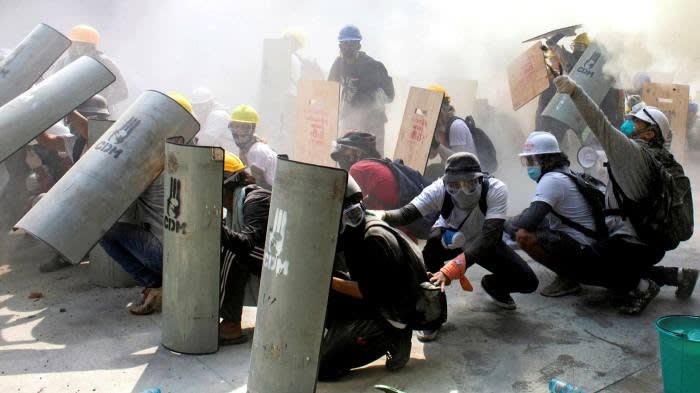 Myanmar’s junta has ordered foreign embassies, UN agencies and other international organisations in the country not to talk to “illegal entities” representing Aung San Suu Kyi’s political party, which it forced out of power this month.

The regime’s warning to embassies came as representatives of Aung San Suu Kyi’s toppled government consolidated their drive for international recognition, amid a sharp escalation of a crackdown by the military regime on Sunday that turned parts of Yangon into battle zones.

Police and soldiers on Sunday fired live ammunition, stun grenades and tear gas at crowds in Myanmar’s biggest city, and clashed violently with protesters in Mandalay, the second city, Dawei in the south, and several other cities, including in ethnic minority states.

At least 18 people died in the worst day of violence since the coup, and hundreds were arrested over the weekend. The directive from Myanmar’s military-controlled foreign ministry, dated February 26 and seen by the Financial Times, said that the formation of groups such as the Committee Representing the Pyidaungsu Hluttaw (CRPH), or parliament, formed by MPs pushed aside in the February 1 coup, were illegal. (FT)

In a year of scientific breakthroughs — and political failures — what lessons can we learn for the future? Humans have never been so powerful in their war with pathogens, writes Yuval Noah Harari. Follow the latest with our live blog.

America scores in drone war with China California-based Skydio has become the first US drone maker to be valued at more than $1bn in a fundraising that signals broader confidence for America’s second act in the drone wars with China. (FT)

Hong Kong’s largest national security crackdown yet Forty-seven pro-democracy campaigners and activists were charged on Sunday with conspiracy to commit subversion. The nearly four dozen individuals are expected to appear in court on Monday. (Reuters)

Warren Buffett warns of ‘bleak future’ for debt investors The 90-year-old chief executive of Berkshire Hathaway told shareholders in his closely followed annual letter that it was best to eschew the fixed-income market, in which the company is itself a large player. US Treasuries rallied on Friday, following the most turbulent day for the world’s biggest bond market since March 2020. (FT)

Chinese investors turn away from Australia The value of Chinese investment in Australia collapsed last year in the face of tougher scrutiny by Canberra, a breakdown in bilateral relations and a global downturn in foreign investment owing to the pandemic. (FT)

Huawei takes HSBC to court in Hong Kong Huawei has launched court proceedings against HSBC in Hong Kong as part of its fight to stop the extradition of Meng Wanzhou, its chief financial officer and daughter of the company’s founder, from Canada to the US. (FT)

NYSE to suspend trading of China’s Cnooc next month The New York Stock Exchange is to start delisting proceedings against China National Offshore Oil Corporation to comply with an executive order from Donald Trump that bans Americans from investing in companies with ties to the Chinese military. (FT)

Washington launches air strikes The US has carried out air strikes against Iran-linked militia groups in Syria in retaliation for recent attacks on American and coalition personnel in Iraq, the first such military action since Joe Biden took office. (FT)

Zoom earnings The video conferencing company is expected to deliver a year-over-year increase in earnings on higher revenues on Monday when it announces results for the quarter that ended in January. (Nasdaq)

UN publishes investigation report on Alexei Navalny The international body will release its report on Russia’s treatment of Kremlin critic Alexi Navalny on Monday. Earlier this month the UN human rights office said it was “deeply dismayed” by the sentence of Navalny, who has since been transferred to a penal colony outside Moscow. (UN, Reuters)

Vaccination news India will expand its vaccination programme to begin inoculating those people above 60 and those over the age of 45 with underlying health problems. The UK will allow over 60s to get their jabs starting Monday. (Quartz, LBC)

The booming market for shares in the hottest start-ups The global market for shares in private start-ups such as TikTok owner ByteDance, Elon Musk’s SpaceX and payments company Stripe has become an opaque but fast-growing corner of finance. Often, the investors receive scant rights to information on financial performance. (FT)

The scourge of work email Email and its more fevered cousin, Slack, no longer simply interrupt important tasks, writes Pilita Clark. They fuel an endless, attention-draining digital discussion about those tasks that we have come to regard as both normal and unavoidable. (FT)

Panasonic signals a break from its past Given the company’s size, its well-known conservatism, and its status as a national industrial icon, its new ad campaign depicting Japanese same-sex couples is a cautious step in the right direction, writes Leo Lewis. The question is how far Panasonic has actually ventured. (FT)

Lunch with the FT: Chef Ruth Rogers The River Cafe co-founder spoke virtually with the FT’s Jo Ellison on adapting in a crisis, changing food culture — and why collaborating is key in a kitchen. During the pandemic the River Cafe’s story has been one of triumph against adversity. (FT)

How Europe became the world’s biggest electric-car market Last year Europe’s share of new electric vehicle sales nearly doubled to 43 per cent, surpassing China to overtake the EV market. But the continent’s surge largely relies on government subsidies, some of which are set to expire at the year’s end. (WSJ)

Joanna Coles: a media star scores with Spacs The former Cosmopolitan editor’s deal to buy and list a fintech group is just the latest example of a Wall Street craze. Coles and her new business partner Jonathan Ledecky have founded several special purpose acquisition companies to target opportunities in emerging markets and among younger consumers. (FT)

Jay-Z’s hip-hop path to luxury influence It has been another busy week for the musician and entrepreneur, starting with an LVMH deal to expand his Armand de Brignac champagne globally. The striking thing about Jay-Z is how accurately he sensed how the world would evolve, writes John Gapper. As he once rapped: “Put me anywhere on God’s green Earth, I triple my worth.” (FT)

Video of the day

GameStop to Tesla: investor Jeremy Grantham on ‘crazy’ markets The founder of GMO, known for calling several of the biggest market turns of recent decades, talks to the FT’s US finance editor Robert Armstrong about his fears for a stock market crash in 2021.