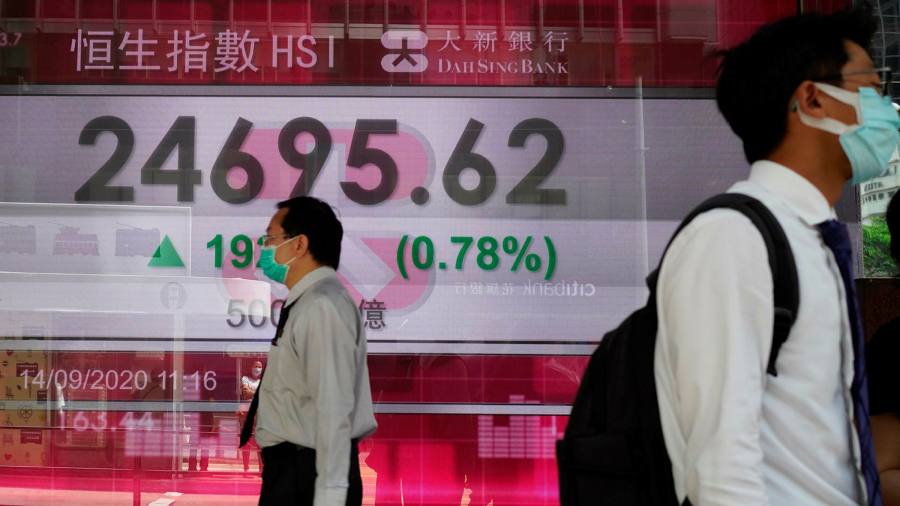 Markets in Europe on Tuesday joined a rally that began in Asia. The region’s Stoxx Europe 600 index gained 1.6 per cent in morning trading, with London’s FTSE 100 up 1.7 per cent and Germany’s Dax rising nearly 2 per cent.

A Financial Times poll tracker shows Mr Biden has an advantage over Mr Trump, polling ahead by about eight points in a composite of national surveys. The Democratic hopeful is also leading in key states, but his lead has narrowed in some areas since the summer.

That has boosted analysts’ expectations that Mr Biden could take the White House and unleash a large-scale government spending programme that could offset the economic blow to the US from the coronavirus — particularly if his party wins a majority in both chambers of Congress, in what has been called a “blue wave”.

We expect numerous litigation battles, particularly if the race is tight

“The equity market appears to be pricing in the increased odds of a Biden win and a blue wave,” said Hong Li, head of US equity quantitative strategy at Citigroup.

“Timely and clear election results will remove one of the two major risks for the equity market and may bring a clearer picture of the potential stimulus package,” he added.

“Market participants are ramping up their conviction of Biden’s victory,” said Ken Cheung, a strategist at Mizuho Bank in Hong Kong, adding that polls suggested the Democratic candidate’s lead was larger than Hillary Clinton’s four year ago. “It would be more difficult for Trump to make a surprise victory this time.”

Futures for Wall Street’s blue-chip S&P 500 were 1.4 per cent higher on Tuesday. Oil prices also rose, taking benchmark Brent crude up 3 per cent to above $40 a barrel — regaining some ground lost in last week’s sell-off.

China’s onshore-traded renminbi was a little stronger at Rmb6.6794 a dollar. The Chinese currency has rallied in recent weeks on rising expectations of a victory for Mr Biden and hopes of a reduction in trade tensions between Washington and Beijing.

However, analysts have warned of potential volatility tied to the election. A surge in early voting could lead to days or even weeks of uncertainty over the election’s winner as officials strain to tally the results.

Mr Trump’s efforts to curtail the impact of early votes suffered setbacks on Monday after battleground states Texas and Nevada rejected lawsuits intended to stop the counting of ballots widely expected to have favoured Democrats.

The BlackRock Investment Institute said that a Democratic sweep may prompt investors to favour stocks that could benefit from stimulus measures — such as smaller companies and industrial names — over top technology shares.

Elsewhere, Australia’s S&P/ASX 200 rose 1.9 per cent after the country’s central bank cut its benchmark interest rate by 0.15 percentage points to 0.1 per cent and announced an additional A$100bn ($70.3bn) in bond purchases.

Yields on the Australian government’s 10-year bonds fell 0.4 percentage points to about 0.8 per cent following the move.