Kitov Pharma (KTOV) has lost momentum after a strong rally in June. The oncology and pain & hypertension player returned +150% from mid to late June, before giving it all back by early September. The large uptick was on the back of two advancements in the pipeline. Firstly, updates provided on a Bristol-Myers Squibb (BMY) collaboration, commencing a Phase 1 study of the CM-24 compound as a combination with BMY’s Opdivo line. The study’s application is for non-small cell lung carcinoma and pancreatic cancer. A start date is penciled for Q4 2020. The other on progress with NT-219, indicated for potential application in metastatic head and neck tumours. Phase 1 data can be expected throughout 2021.

In our view, the mistake management made was trying to secure additional financing through an equity raise, right about the time of the BMY collaboration announcement. KTOV announced a $19.4 million public offering of depositary shares, at around $1/depositary share. This was directly on the back of the rally which occurred in June. Problem is, the market saw through the fluff of the financing decision. The raise was purportedly a shelf registration, enabling the company to to register additional stock offerings without having create a new issue for every offer. Similar criteria are applied to fixed-income instruments and bonds also, for one’s reference. Therefore, the market immediately saw this as a mask for dilution, which resulted in all of the gains being wiped by September. This was unfortunate for investors, who saw the immediate upside on the back of the collaborative study.

We can see the effect of this announcement directly on the charts, with a vertical peak that originated in mid-June pushing the stock to all-time highs in a matter of days. Then, by June 23rd, when the company announced the shelf registration, the market immediately turned sour and started unloading positions all the way until August. The only volatility was to the downside, even after a small consolidation at the beginning of August. The consolidation was immediately offset at that time, as the company changed its depositary share to ordinary share ratio from 1:1 to a new ratio of 1:10 (1 depositary share to 10 ordinary shares). Effectively, this was a reverse split, meaning the depositary shares were basically merged to form a larger number of stock, signalling bad news for investors and current shareholders at the time. What is more alarming is that the company was required to do this in order to maintain its Nasdaq listing, which raises more questions on corporate governance and value creation for shareholders.

Thus, management’s decision directly impacted shareholders, and the investor sentiment was bearish, as we saw continued value erosion up until today’s trading of $4.37.

Since then, the trend line has been flat, where the stock has struggled to find range, neither breaking resistance nor finding support. Unfortunately for KTOV, there has been no real demonstration of support over the last few months, even on the back of several advancements in the development pipeline, which are discussed later. We can notice on the chart below, the stock snaking around the flat average line, indicating that there is no real interest or momentum that would cause a short-term uptick in price. We firmly believe that this is on the back of management’s decision to dilute existing shareholders, which it had already committed to earlier in 2020. Therefore, investor sentiment is bearish at this point, in our view.

We can see evidence of the above points on the chart below. Investors should be weary of entry at this time, considering the lack of evidence of the stocks next moves, even on the back of the company’s developments to date. We feel this dislocation in investor sentiment and business development presents as a large risk for investors over the medium term. Therefore, we advocate for investors to hold back on any decision for entry, as there are no well-defined entry points, nor evidence that the market will elicit a turnaround anytime soon.

Since July, there have been several advancements in the company’s developmental pipeline. In early July, intention to grant a patent in Europe was indicated by the respective body over there. The patent pertains to KTOV’s application over DNA sequences that involve humanised antibodies, capable of binding to specific CEACAM1 molecule. This molecule is a key to human physiology, and is involved in the governing of cell differentiation and belongs to the immunoglobulin family. It has high relevance in oncology-type studies. Protection over these types of processes therefore aligns strategically with the company’s oncology segment. Around the same time, the company also initiated a phase 1/2 trial for its NT219 therapy for application in advanced tumours, including a dual therapy with Cetuximab, which acts by blocking epithelial growth. The major applications were for head and neck tumours, metastatic in nature, which hold a hard-to-treat label. Shares consolidated at this time, which was seen on the charts above. However, there was no real boost like in June.

Then, in August, the company announced that it had received confirmation of the same patent it applied for in Europe, albeit from China – this patent being the DNA process over the antibody-binding process outlined above. The move was a key advancement for KTOV, as it continues to secure intellectual property rights and licensing opportunities for this oncology process. The patent applies to both the CM24 and NT219 therapies, which further aligns with management’s strategy, particularly with CM24 and the application with BMY’s Opdivo. Again, there was a small consolidation in returns for shareholders, however, on the back of the dilution decision from management, the good news here was immediately offset towards the downside. 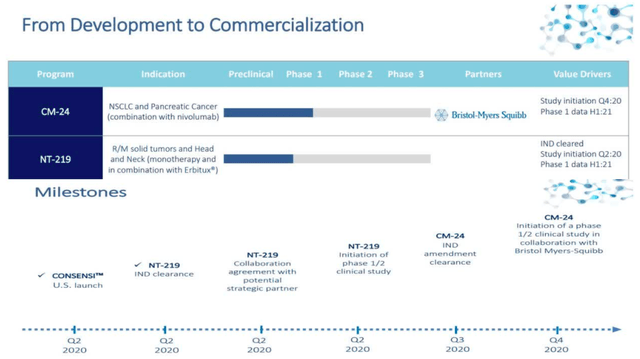 KTOV then commenced its first phase of dosing trials for NT219 in early September, and results are expected early next year. By October, the company had already demonstrated additional application of the drug’s mechanism of action to colorectal cancer. Most recently, KTOV secured the US patent for the NT219 and CM24 therapies outlined above, however this time, the market was unresponsive. Perhaps investors recognised the risks on riding the waves in previous run-ups, where management has responded with dilution and unfavourable attempts to reward value to shareholders. This is disappointing, because in light of all these advancements, there should be more love for the company at this stage. In our view, management has scared the herd, and this is directly reflected on the charts.

Fundamentally, KTOV presents an interesting case. It left the second quarter with around $60 million in cash, however, free cash flow from 1H was negative at -$4.6 million. FCF yield is therefore also negative at -20.99%, and the company only holds -$0.08 in free cash per share. On a multiples analysis, the stock seems quite expensive with P/Sales of 26x and EV/Sales of 12.8x. Therefore, on a valuation front, the stock remains unattractive compared to other names with exposure to oncology, pain and hypertension.

We don’t see strength on the balance sheet, in spite of a strong cash position of around $60 million exiting 1H 2020. Total debt has been contained over the last year, however, poor sales results and lack of profitability place KTOV at risk of not meeting its obligations as they fall due. However, short-term obligations are covered 2.22x from liquid assets, and low inventory holding means that there is little difference from this number when performing an acid test over short-term solvency. Interest coverage remains questionable, as it has done over the past 2 years, as the interest expense is not well-covered from EBITDA or EBIT line values. The evidence of the company consistently relying on shareholder dilution is seen on the total debt-to-capital, net debt-to-equity and net debt-to-capital lines on the table below, which are extraordinarily low, in our view. Equity investors are unlikely to see upside in the future from this perspective. Therefore, the company has finance risks that align with dilution risk, interest rate risk and operational risks moving into the future.

The company also demonstrated low correlation and causation from R&D expenditure to top line earnings, which has been consistent over time. Since 2017, just after its NASDAQ listing, KTOV has failed to leverage R&D spending to top line revenues. We view this as a strength for companies in KTOV’s sector. Companies that can demonstrate high correlation and causation coefficient with R&D expenditure and revenues will consistently deliver high return on capital, in our view. Correlation between R&D spending and top line earnings for KTOV smooths to be under 48%, and the causation coefficient is around 24%, leading us to believe that around 76% of the company’s revenues are dependent on exterior drivers for volume. This includes sales volume, patents and licensing. Therefore, there are pipeline risks for KTOV considering this lacklustre performance over the years.

KTOV has failed to regain its flair from the June highs despite several key advancements in the company’s developmental pipeline. The market sentiment has remained sour after shareholder dilution measures across this year. Unfortunately for KTOV, these advancements have been quite significant, because there is value in the patents that have been granted in key markets for its NT219 and CM24 segments, which could have benefited a more popular company more in theory. We see evidence of the company’s reliance on shareholder dilution for financing, as our credit analysis reveals weakness from leverage versus equity capital to finance operations. This poses additional risks to investors, who may be diluted should KTOV opt to expand its pipeline further. Additionally, correlation and causation between R&D expenditure and revenues has been quite low historically, meaning that the company is relying on external drivers for revenue volumes. As such, over 70% of revenues are driven through sales volume, patent value and strategic partnerships, over return on invested capital and R&D spending. Therefore the pipeline and execution risks are high for the company, and there may be better opportunities for exposure to oncology, pain and hypertension elsewhere in the market at this stage.

Disclosure: I/we have no positions in any stocks mentioned, and no plans to initiate any positions within the next 72 hours. I wrote this article myself, and it expresses my own opinions. I am not receiving compensation for it (other than from Seeking Alpha). I have no business relationship with any company whose stock is mentioned in this article.