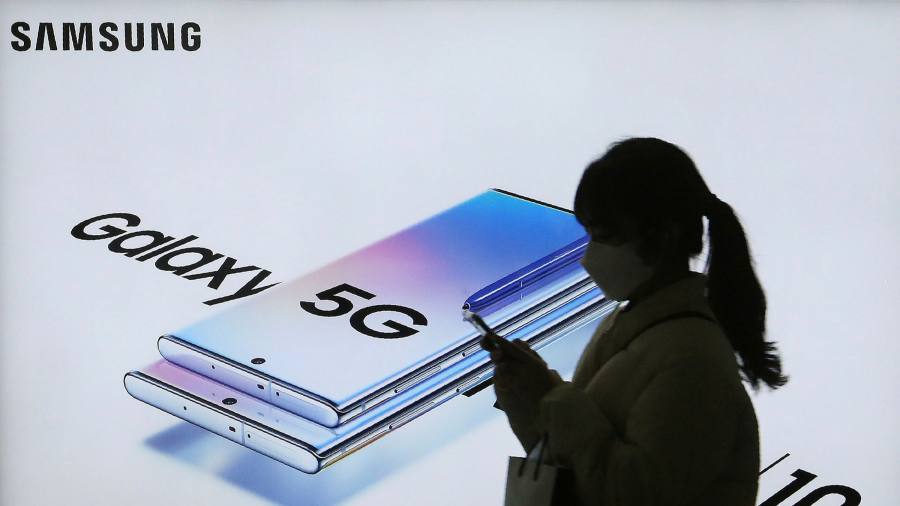 Samsung Electronics said a global semiconductor shortage that has hit global carmakers could also disrupt orders for the memory chips used in smartphones, as manufacturers rushed to respond to the crisis.

The warning from the world’s biggest memory chipmaker comes as companies and governments grow concerned that constrained chip manufacturing capacity could derail countries’ economic recoveries from the coronavirus pandemic.

The rush by semiconductor foundries to meet demand for auto chips means many are now operating at full capacity, limiting their ability to take on new orders, which could in turn slow deliveries of chips designed for mobile devices.

Samsung said on Thursday that this squeeze on foundries, and any subsequent slowdown in mobile device orders, could affect demand for its Dram and Nand memory chips, which enable smartphones and tablets to perform multiple tasks at once.

“Because of the foundry supply shortages that have become an issue globally, the supply issue of other semiconductor parts could affect mobile demand, so we are closely watching the implications,” said Han Jinman, executive vice-president of Samsung’s memory chip business.

Global semiconductor players are already moving to address shortages in chips for the car industry.

Taiwan Semiconductor Manufacturing Company, the world’s biggest contract maker of processor chips, said on Thursday that it was “expediting” automotive-related products in an attempt to meet automakers’ needs.

“While our capacity is fully utilised with demand from every sector, TSMC is reallocating our wafer capacity to support the worldwide automotive industry,” the company said.

CC Wei, TSMC’s chief executive, told investors last week that it had converted some manufacturing capacity to respond to the sudden resurgence of demand for automotive chips at the end of last year.

The Taiwanese group’s increased attention came after automakers pushed governments to campaign on their behalf.

Car companies in Europe, Japan and the US have engaged in direct talks with the chipmaker as well as lobbied via industry associations’ diplomatic channels to Taiwan’s government, economy minister Wang Mei-Hua and TSMC have said.

People directly familiar with those communications said such lobbying efforts were unusual.

“We believe that as economies are struggling due to the pandemic, governments, especially in the countries hit worst by the virus, see car demand as a rare growth impulse important for their overall economies,” said a Taiwanese government official. “We would not normally see this kind of approach if it were only about a few individual companies.”

The company’s foundry business posted record quarterly revenues in the three months to December, it said on Thursday, led by strong demand for the chips used in 5G mobile technology and high-performance computers.

Semiconductors, which accounted for nearly half of Samsung’s operating profits last year, are likely to drive an earnings increase in 2021 as chip prices rise.

“The chip price increase this year won’t be as rapid as 2017-18 but we will see a steady rise with a prolonged upcycle, which will be healthier,” said Daniel Kim, an analyst at Macquarie.

The company’s net profits in the fourth quarter rose by 26.4 per cent year-on-year to Won6.45tn ($5.78bn). The profits were below the Won7.3tn forecast by analysts polled by Bloomberg.

Your crucial guide to the billions being made and lost in the world of Asia Tech. A curated menu of exclusive news, crisp analysis, smart data and the latest tech buzz from the FT and Nikkei