Home Stock Market Why polls get the ‘Latino vote’ so wrong 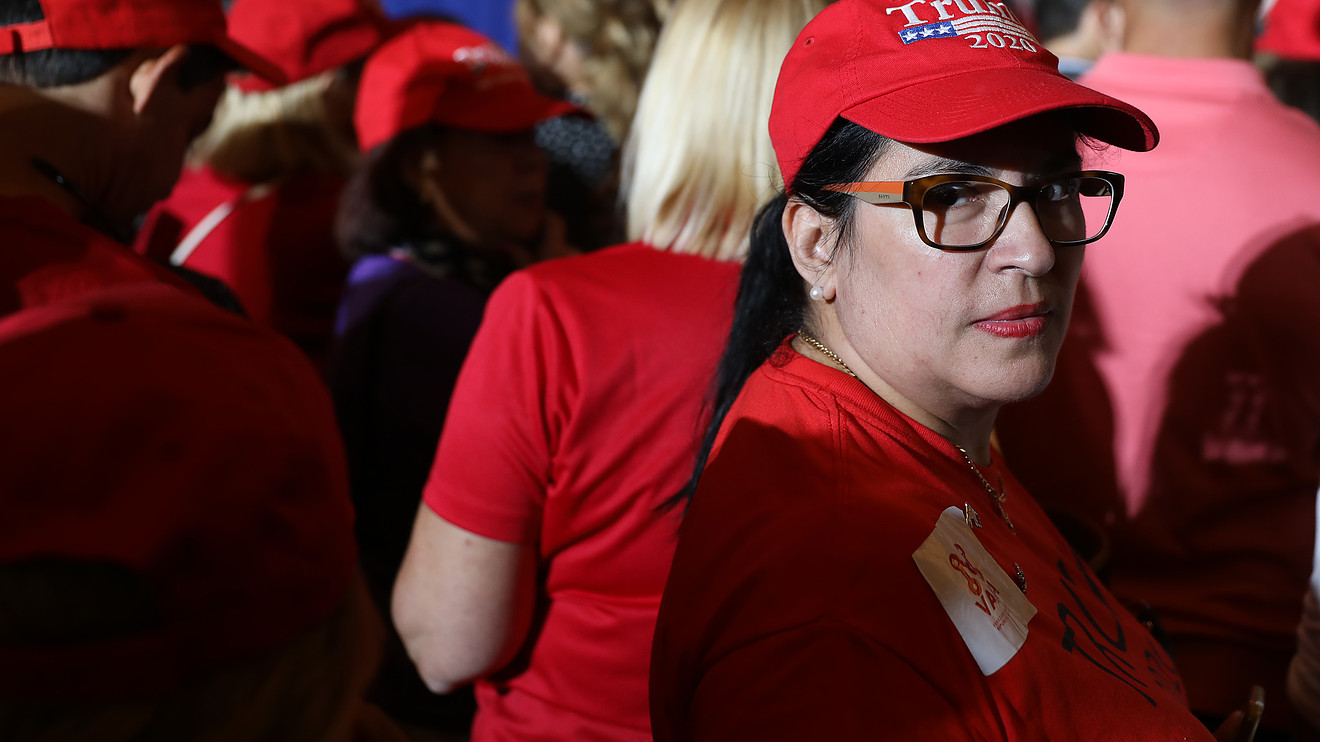 One major takeaway from the presidential election even before all the votes have been tallied: Despite pundits’ and pollsters’ discussion of the “Latino vote” or “Hispanic vote” — it was never a unified block for one candidate to win.

The U.S. Census Bureau defines a Hispanic or Latino person as someone of “Cuban, Mexican, Puerto Rican, South or Central American, or other Spanish culture or origin regardless of race.” In other words, Latino or Hispanic is a broad label encompassing in the U.S. roughly 61 million people of different races, countries of ancestry, economic circumstances, genders, locations and other characteristics. (Hispanics, as generally understood, must be descended from Spain or a Spanish-speaking country, thereby excluding, for example, the Portuguese-speaking Brazilian population.)

“
‘Essential workers in my community, my Hispanic brothers and sisters, who have been disproportionately impacted by COVID.’
”

“I talk about it as a population and not a community,” Mark Lopez, director of global migration and demography research at the Pew Research Center, said of the Hispanic or Latino population. “To call it a community suggests that it has shared values and interests. It isn’t necessarily the case.”

In fact, the labels Latino (and Latina and the gender-neutral Latinx) and Hispanic are U.S. inventions, Lopez said. “Outside of the U.S. these terms don’t resonate in the way that they do here,” he said. “The idea that we group everybody together as a single group — it’s really something that’s unique,” Lopez said.

People like Victoria Gutierrez and Sergio Arellano illustrate that divide.

Gutierrez, a “proud second-generation Cuban American” and critical-care nurse in Madison, Wis., said those two parts of her life melded together to motivate her vote for Biden.

Gutierrez, 53, thinks the pandemic has been “mishandled completely at the federal level” and she knows “essential workers in my community, my Hispanic brothers and sisters, who have been disproportionately impacted by COVID.”

The pandemic’s flare-up in Wisconsin has ratcheted up Gutierrez’s anxiety in an already-stressful job. “Is today the day that I get exposed? The day I bring it home?”

“
‘When you look at what President Trump’s background is, how he was very business-driven and focused, that was a natural selection for me.’
”

Then there’s Arellano, 36, who has been around business since he was a kid haggling for the best price he could fer at flea markets on discarded toys his father, a garbage man, had collected on his route.

“When you look at what President Trump’s background is, how he was very business-driven and focused, that was a natural selection for me,” the Tucson, Ariz., business owner and military veteran said, thinking back to his 2016 vote for the president.

Arellano is now a member of the Latinos for Trump Advisory Board and cast a ballot for Trump again this week. “The guy’s walked the talk,” Arellano said, pointing to things like the CARES Act’s Paycheck Protection Program extending forgivable loans to businesses

Arellano remembers when he first registered to vote years ago and asked the local government employee accepting his paperwork what the difference was between registering as a Democrat and a Republican.

“Democrats are for the poor people, and Republicans are for the rich people,” he remembered her explaining. “Coming from nothing,” Arellano said, the idea of prosperity sounded good to him.

That fits with the cultural upbringing of a first-generation American who was born and raised in Tucson after his parents came from the Mexican state of Sonora. “We do not want to work for other people,” he said. “We want to work for ourselves and achieve that American Dream.”

It’s a population, not a community

There are several key points of difference in the experience of Hispanic voters, according to Lopez:

Country of origin — where the families of voters who identify as Latino come from — likely influences approaches to politics.

Race — some Latino voters identify as Afro-Caribbean, some identify as white, some as a member of an indigenous group and others, when asked, write in something else — also should be considered. “There is a story about race within the population that is perhaps unique to the population but is also intertwined with race in the United States and how we think about it here,” Lopez said.

“
Hispanic residents of South Florida ‘tend to be college-educated, tend to be professionals and tend to have higher levels of income.’
”

Latino voters also vary widely by education level. Roughly 55% of adults in the U.S. of Venezuelan origin and about 43% of those of Argentine origin have at least a bachelor’s degree, compared with 10% of Guatemalans and Salvadorans, according to Pew.

Hispanic residents of South Florida “tend to be college-educated, tend to be professionals and tend to have higher levels of income,” Lopez said. “It’s notable how distinct South Florida is in its economic characteristics.” That may explain in part, why Trump overperformed in places like Miami-Dade County. Voters earning $100,000 or more were more likely to vote Republican this election than those with lower incomes, according to exit polling.

Meanwhile, Latinos were harder hit than other groups by the coronavirus pandemic, which was a top concern of Biden voters, according to exit polls.

The Great Recession took a similarly outsized toll on Latinos, who are still recovering economically from that downturn.

A diversity of political perspectives

Latino diversity plays out in several politically relevant ways, said Heather Silber Mohamed, associate professor of political science at Clark University and the author of “The New Americans? Immigration, Protest and the Politics of Latino Identity.”

For example, the fact that the Latino population in South Florida — which is dominated by people of Cuban and Venezuelan origin — helped to deliver the state to Trump is a “classic example” of the way voters’ experience of politics in their country of origin or ancestry influences their experience in the U.S.

“Many of these voters fled to the U.S. to escape leaders who identified with these traditions,” Silber Mohamed said of communism or socialism, even as Trump critics observe that his labeling of the press as an enemy of the people and his relative indifference to democratic traditions constitute a linkage with the past and current autocrats of Latin America. Still, “Trump’s campaign has really been able to build on these fears.”

In addition, the region or state in which Latino voters reside also likely influences their political opinions. For example, in 2010, Latino voters in Arizona were mobilized around S.B. 1070, a bill that was seen as geared toward immigrant profiling, Silber Mohamad said. That tradition of political activism seems to have carried through to this election and what appears to be have been a preference for Biden among Hispanic voters in Arizona.

Latino voters are also increasingly likely to identify as evangelical Christian, Silber Mohamed said, but it’s still too early to tell how that might influence their voting decisions. “For this election I’ll be really curious to see once we have more data that we can look at, whether the trends of white evangelicals hold within the Latino population,” she said.

How Biden and Trump attempted to reach Latino voters

Despite surprise among some observers that Hispanic voters helped deliver Florida to Trump, in the lead-up to this election there was already a recognition of the diversity of Hispanic voters, said Adrian Pantoja, a professor of political studies at Pitzer College.

“The days of broad-based Latino appeals are dead,” said Pantoja, who is also a senior analyst at Latino Decisions, a political opinion research organization. “Microtargeting is in, but don’t assume that one party or one candidate has an advantage.”

During the campaign, the Biden team reportedly dispatched Mexican, Puerto Rican and other volunteers to call voters from their same country of origin with the goal of mobilizing them around shared concerns. “This is one of those elections where we are waiting to see how did this play out? How did this strategy pay dividends? There’s still a lot of dust in the air,” Pantoja said.

The Trump campaign also appeared to have used a targeted strategy among Latino voters, Pantoja said, but instead of basing it on country of origin, it was based on gender. When Latino men were contacted, it was more likely to be by the Republican Party than contacts targeting Latinas, according to poll data from NALEO Education Fund and Latino Decisions. Forty-seven percent of men who were contacted said they heard from someone from the GOP while 28% of women who were contacted said they heard from the Republican Party.

“Men in general found Trump’s message appealing,” Pantoja said. Indeed, exit polls indicate that Trump had a slight edge with male voters, while Biden was more popular among women. “One of the things I emphasize is that Latinos are like other American voters.”

There are many reasons to donate to charity this Giving Tuesday...

There are many reasons to donate to charity this Giving Tuesday...